Updated: Monday, 8/23/21 — Yesterday weather conditions allowed for crews to reinforce lines put in place. The heavy winds fanned a small two-acre fire believed to have started from Friday’s thunderstorm. Initial attack was able to contain the fire quickly. Heavy equipment and crews continued to prepare lines to the south near Slide Ridge in anticipation for strategic firing operations when weather and fuel conditions align. Crews again maintained an overnight shift, reinforcing structure protection operations in and around properties and homes.

Today, fire behavior is expected to increase as the warmer weather dries fuels back out following the rain. Heavy equipment and crews will construct line south of Junior Point to DP 50. Along the southern and western edges of the fire, crews will continue to prepare for strategic firing operations, specifically looking at areas to the south of the fire near Slide Ridge and west towards Devils Backbone. Firefighters will continue to improve and secure containment lines in the vicinity of Grouse Mountain. On the northern perimeter of the fire, crews and engines will be patrolling and mopping up and remaining heat in and around the structures as well as along South Lakeshore Road.

Rotor and fixed-wing air resources will continue attack on the fire throughout the day. Aircraft may use local bodies of water, including Lake Chelan, to fill. Recreational boaters should be aware of aircraft takeoff and landings and keep a safe distance.

The Twenty-five Mile Fire was first reported at 3:45 p.m. on August 15, 2021. The fire was initially burning on the south shore of Lake Chelan near Twenty-five Mile Creek and has expanded south and west of the area. The fire is under joint jurisdiction of the Okanogan-Wenatchee National Forest, Washington Department of Natural Resources, Bureau of Land Management and Chelan County Fire District 7.

Weather: There is no anticipated rain in the forecast for the next week. Today temperatures are expected to be cooler with South to Northwest/West winds gusting 20-30 mph. The early evening there is potential for cloud cover. 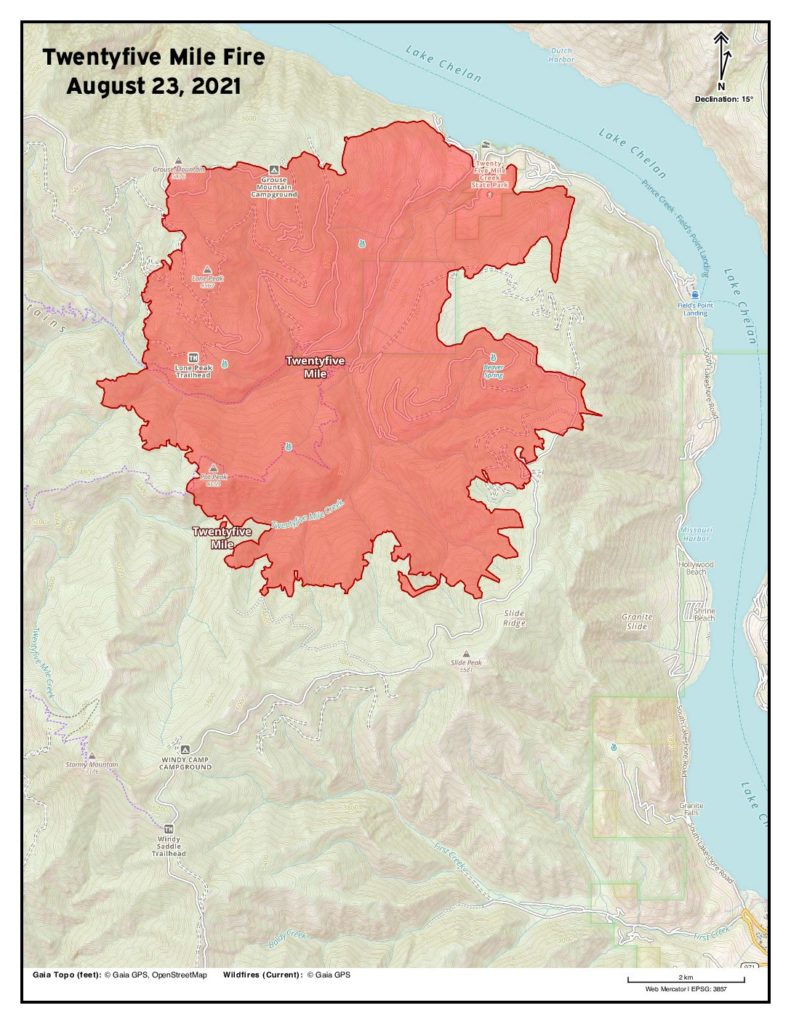 Level 2 (Get Set) from South from Cove Marina to Morning Sun Drive.

Closures: A forest area closure is in effect. All roads in the Level 3 area are closed to the general public including Lakeshore Road. Residents are asked to avoid travel on open areas of Lakeshore Road to make way for firefighting personnel and equipment.

Fire Restrictions: Campfire restrictions are in effect. Campfires are prohibited throughout the Okanogan-Wenatchee National Forest, including developed campgrounds and Wilderness areas.