Special Event regarding Grizzly Bear Plan on October 17 in Winthrop

The Lake Chelan Valley holds a special place in my heart. It reminds me of visiting my grandparents in Clearlake near the Mendocino National Forest. The rural community there enjoyed a lakefront that beckoned summer sun worshipers and recreationalists of all stripes to fish, hunt, boat, and find peace. Clearlake and Lake Chelan are also similarly girded by magnificent public forest lands, resources that support wildlife as well as our love for hiking, camping, and exploring the outdoors. But above all, the Lake Chelan Valley has something Lake County will likely never have—an essence of wildness and ability to support every major wildlife species native to the area, including the grizzly bear.

I was recently captivated by the local meeting on grizzly bears held by the Chelan County Commission. From the Stehekin Lodge’s general store, to the inns, gift shops, and bed and breakfasts in Chelan, stores are ornamented by wild references, with grizzly bears on shirts, postcards, and other memorabilia. The community rightfully takes pride in its ability to live alongside the wildest elements of the North Cascades. Perhaps that is why I was a little surprised to see such trepidation at the prospect of saving the North Cascades grizzly. Biologists say that we may never see grizzly bears again in the North Cascades unless we bring them back ourselves, a prospect that is now being considered by the U.S. Fish and Wildlife Service (USFWS) and the National Park Service (NPS).

In 1975, the USFWS listed the grizzly bear as a threatened species. These bears were hunted and trapped to the limit by the Hudson’s Bay Company in the 1800s—records show that local forts processed around 4,000 pelts in the span of 15 years.[i] As a result, the slow-reproducing grizzly bear never recovered in the North Cascades.

Fast forward to a few weeks ago, I visited Chelan to talk grizzly bears at the library, where I was greeted by interested adults, a helpful library staff and excited children who had many questions.

As a member of the Friends of the North Cascades Grizzly Bear coalition, and a staff member of the National Parks Conservation Association, I shared the plans under consideration to restore grizzly bears to North Cascades National Park and the surrounding wilderness. The four plans range from doing nothing, to adding 10 bears, 25 bears, and the most aggressive, unrealistic and unsupported “Alternative D” which considers adding bears until the target population of 200 is reached.

Friends of the North Cascades Grizzly Bear and many others support “Alternative C,” the option to  translocate 25 bears into the heart of the North Cascades. Under this plan, scientists estimate that recovery could take a century to reach the target population of 200 bears.

With roughly 9,800 square miles of viable habitat, biologists have concluded that there is enough food and space for grizzly bears in North Cascades National Park and the nine surrounding wilderness areas, and have identified more than 100 different plants that can feed a grizzly bear, whose diet is roughly 80 percent plant based. 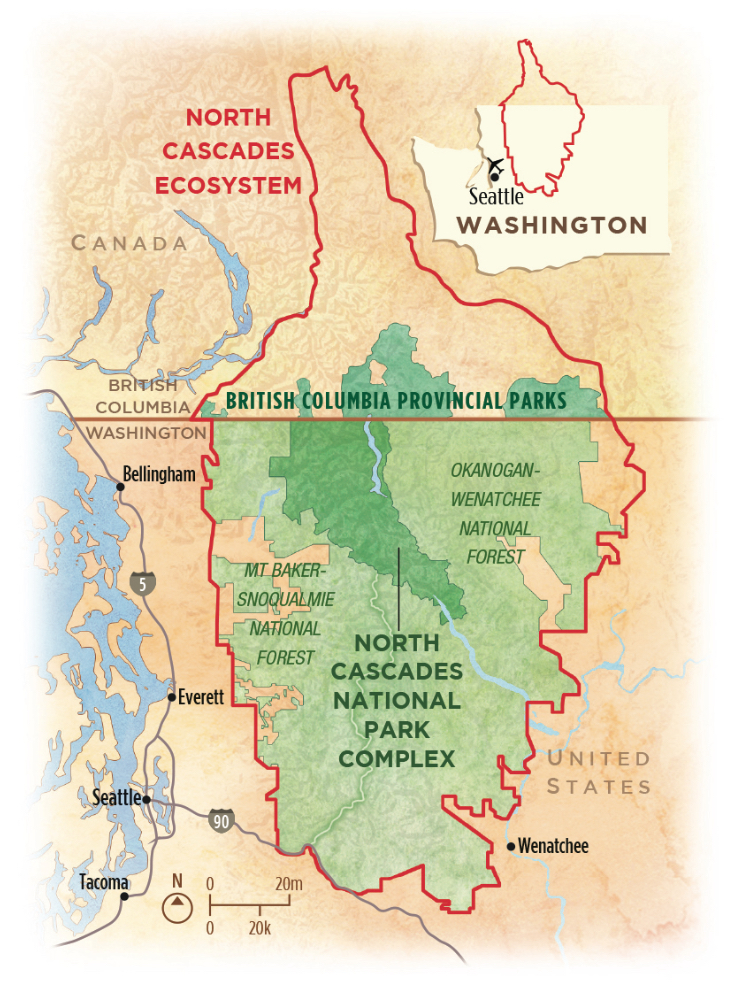 Despite the abundance of food and space in the North Cascades, community members at a recent public meeting in Chelan voiced concern that bears will disperse to orchards, farms, local garbage dumps, and backyards. It is true, bears will follow the food. However, the rugged, mountainous and remote North Cascades make it hard for bears to travel long distances, summit mountains, and otherwise move across the landscape. Data of bear sightings going back as far 1859 did not show bears in Chelan, with most sightings west of Lake Chelan, and north of Stehekin.[ii] Thankfully, a tremendous amount of thought has been put into the management of grizzly bears. Scientists know that bears will not be tolerated in communities, so they’ve suggested a few precautions.

Before any bears would be released, agencies would conduct at least one year of public outreach and education in local communities. They’ve had success doing this in the Cabinet-Yaak Mountains in Northwest Montana. When wildlife managers are ready to release the bears, every bear would wear a radio collar for scientists to monitor how bears travel, and if necessary, move, remove or lethally take a grizzly bear that has frequent conflict with communities.

Federal agencies intend to manage North Cascades grizzly bears under the Endangered Species Act’s 10(J) rule, which increases the flexibility wildlife managers have to manage the population. Normally, endangered species cannot be disturbed, but the 10(J) rule allows the agencies to create a map of where grizzly bears do and do not belong. If bears go to places they do not belong, agencies have complete jurisdiction to remove them. Since all relocated bears will have radio collars, it is likely that agencies will know if bears are not staying put. Altogether, public outreach and education, radio collars, and management under the 10(J) rule should significantly reduce concerns that bears will interrupt daily life in the Lake Chelan Valley.

Of course, community members also expressed valid concern about their relative safety in the backcountry. The wilderness has never been a safe space. It is different from Chelan Lakeside Park, and the other playgrounds that exist for more casual recreation. With cougars, black bears and other wildlife in the backcountry, precautions must be taken. Plenty of resources exist to help recreationists stay safe in grizzly bear country.

I know there are more questions and concerns than the ones I’ve addressed here. To learn more about the North Cascades grizzly recovery effort, NPCA and others will host a special event at the Winthrop Barn on October 17th,with filmmaker Chris Morgan. Chris will join bear expert Dr. Bill Gaines and Jack Oelfke, the North Cascades National Park’s Chief of Natural and Cultural Resources. There, we will be able to dive into much greater detail, answering many of the important questions local people have.

If you cannot make the gathering, you’re welcome to email me questions at gtaylor@npca.org. Otherwise, you’re also invited to sign-on to the locals-only petition currently being circulated at https://www.northcascadesgrizzly.org/locals-support-letter/. We presented this petition at the October 7th meeting in Okanogan to demonstrate support for bears in the region.

We have a unique opportunity to save the grizzly bear in Washington where its been for thousands of years for future generations.  Let’s figure out how to do this in the best way for people and bears.

[ii] National Park Service “A Synthesis of Historical and Recent Reports of Grizzly Bears (Ursus arctos) in the North Cascades Region,” Sourced from: https://irma.nps.gov/DataStore/DownloadFile/602395 on page 18.