No human cases have been identified

The Benton Franklin Health District said Wednesday that mosquitoes recently collected in West Richland have tested positive for West Nile virus. It’s the first West Nile virus activity in the state this year. No human cases have been identified yet.

“The virus is currently active in our region and the risk of human illness is here. West Nile infection can often be prevented with a few simple precautions,” said Rich Dawson, Senior Manager of Surveillance and investigation.

The Washington Department of Health updated their map (shown) indicating where the West Nile virus activity is occurring in Washington State.

Ongoing West Nile virus monitoring for infected dead birds and mosquitoes is limited to a few counties due to lack of resources.

West Nile virus activity may not be indicated in your county, however, it’s likely to be widespread in our state. 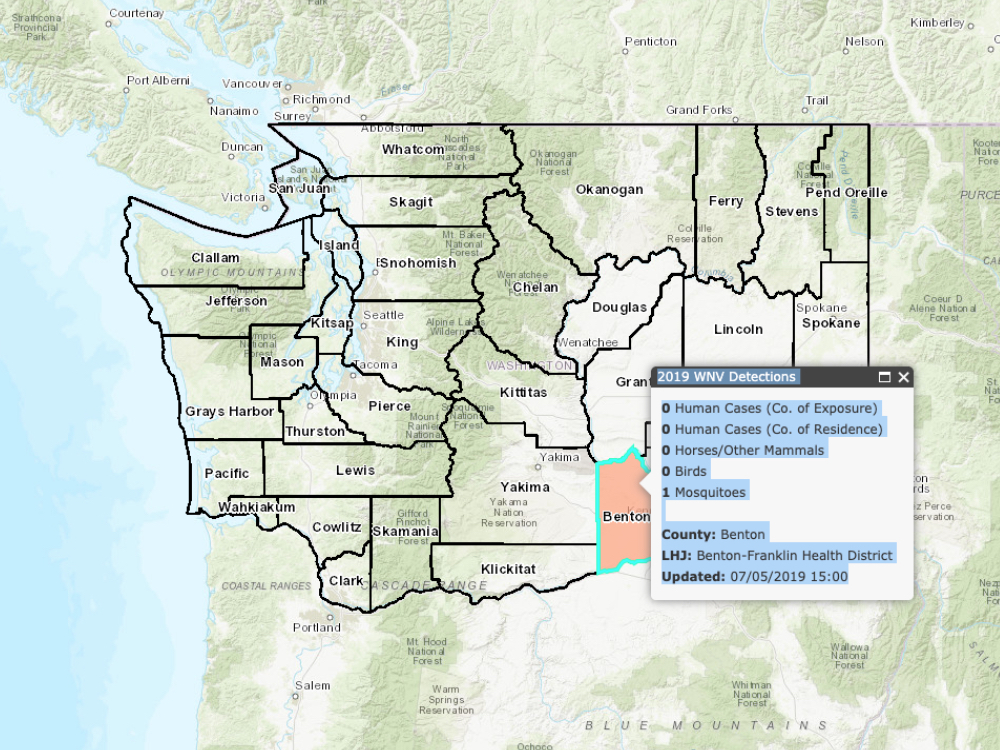 Primarily causing infections in birds, West Nile virus can spread to people and other animals through mosquito bites. While a vaccine is available for horses, there is no current vaccine to prevent illness in people.

Instead, people must help prevent infection through the following steps:

West Nile virus is spread through the bite of an infected mosquito. Most people with the virus have no symptoms, but an estimated two people out of 10 infected will have symptoms three to 14 after the mosquito bite.

Illness from the virus is usually mild and includes fever, head and body aches and possibly a rash. However, serious illness that involves the nervous system, such as encephalitis and meningitis, and death are also possible.

People over the age of 50 or people with weakened immune systems, such as transplant patients, are at the highest risk for getting severely ill when infected with the virus.

The risk of West Nile virus infection will be high until mosquitoes go away after the first hard frost.

The Benton Franklin Health District works with local mosquito control districts and other partners to monitor for the virus. Due to the known activity of West Nile virus in the area, birds will no longer be collected by the health district for testing for the virus.